One of the best online resources on animating /drawing/painting is Aaron Blaise's Creature Art Teacher .com  and his YouTube Channel Art of Aaron Blaise.

Aaron is currently animating a short film , Snow Bear .  He has been doing a series of livestreams showing his process of animating in TVPaint. This is a great way to learn, by watching a master animator at work. (it's like you get to look over his shoulder to watch him animating). 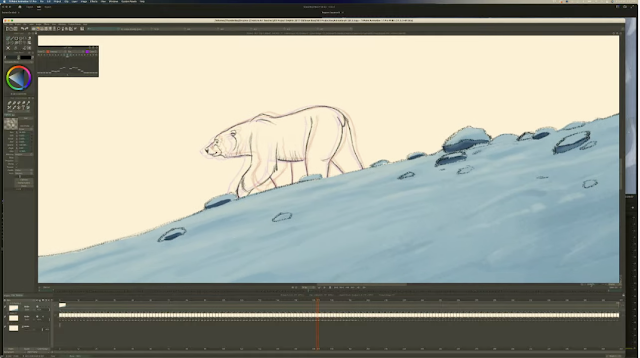 Here's the process video (speeded up) -

Here's the final animation in color -

Sadly, he missed the deadline to submit this animation to the contest ... BUT here is a happy ending:

After several years spent at Blue Sky Animation Erin was recently laid-off from Blue Sky with everyone else because Disney is shutting down Blue Sky  😢  (that is NOT the happy ending) , but I saw on a Facebook post he made that he just got picked up as an animator on the Bob's Burgers Movie. (that's the happy ending !)

One of the advantages of programs like Harmony or Flash (Animate) is that you can draw or make notes outside of the main drawing stage or camera view.   You can do that with TVPaint, too, but you have to set it up properly when you start a New Project.   It's also useful to have this extra border area to adjust the Camera fielding if you need to pull-out  or push-in a bit , or shift the camera east/west or north/south. 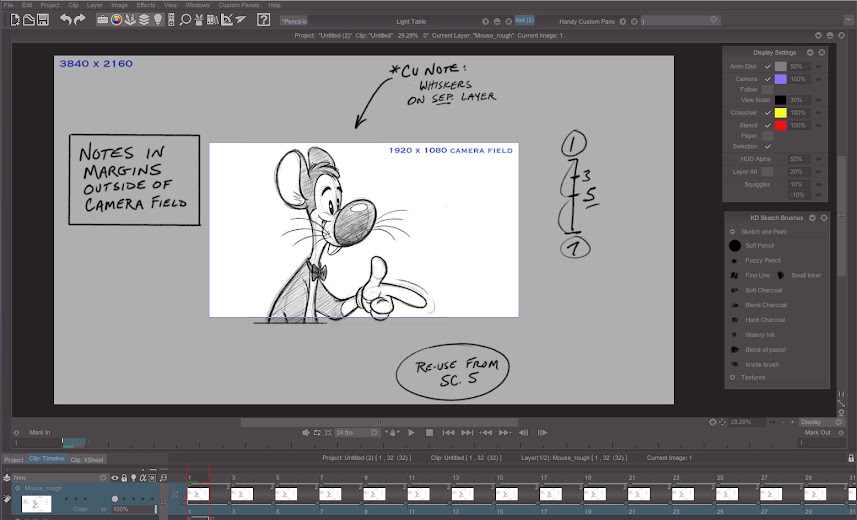 When you're working on the animation at full size , you can zoom-in the project window so you're not seeing the margin areas with the notes , but whenever you need to check the notes or add notes , it's easy to zoom out the interface to see the margins around the Camera field. 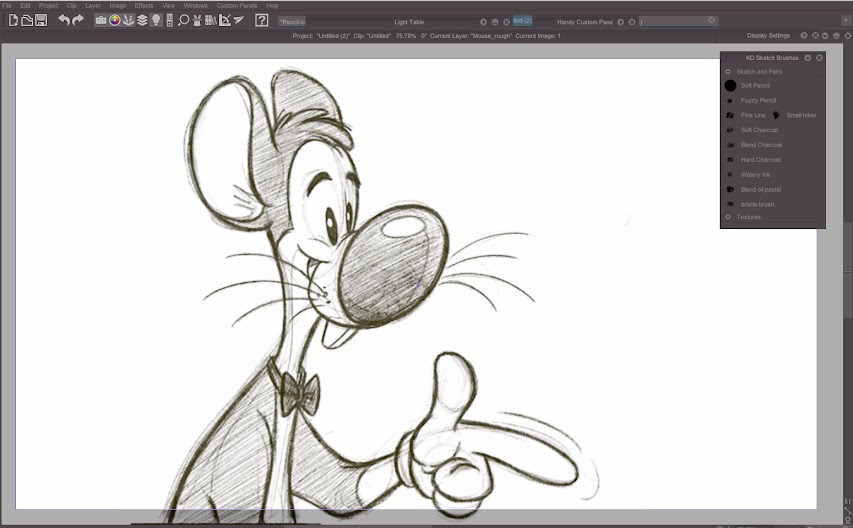 If you were to create a Project With Camera View that is sized up at 120% you'll have less margin area to work with for adding Notes, etc. , but it can be enough.  I find that usually a ratio of 160% - 200% is more comfortable for me. 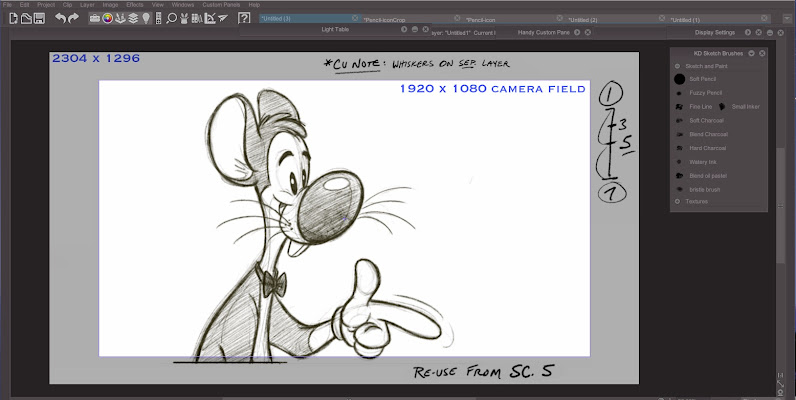 The students at the Gobelins School continue to produce beautifully crafted animated films, most made with TVPaint , including this one , "COLZA"  made by Victor Chagniot, Camille Broutin, Matthieu Daures, , Victoria De Millo Gregory,  , Maxime Jouniot, , Jade Khoo .  (be sure to watch in Full Screen mode at full 1080p HD quality. Turn captions ON to see English subtitles)

The animation and coloring was done in TVPaint, the backgrounds painted in Photoshop and the final compositing was done in After Effects.   (Although you can paint the backgrounds directly in TVPaint many background painters are more familiar with Photoshop , but you can easily import Photoshop .PSD files into TVPaint  ... and also export artwork created in TVPaint as a .PSD file to take it into Photoshop. TVPaint has a special script available to Export your animation from TVPaint to After Effects, which keeps all of the layers and exposures intact.   This allows for animating and coloring in TVPaint, then moving the whole scene over to After Effects to add additional compositing effects.)

Burn Out  directed and animated by Cécile Carre , additional animation by Valentin Lucas (EFX Animation) and Joel Durand.   Made at GOBELINS, l'école de l'image and California Institute of the Arts.

The Making-Of Burn Out by Cécile Carre

Burn Out - MAKING OF from Cécile Carre on Vimeo.

The preproduction lasted 3.5 month. In Gobelins, Paris, with the help of the teachers in Gobelins (and feedbacks from my friends, as well !), I worked in parallel on :

Then I moved in CalArts (California), for an exchange program, to work on the production, which lasted 3.5 month as well. Let's say approximately :

- 1 month for the rough animation (with TVPaint)

- The rest of the time on colorization and compositing. "

An important part of the traditional hand-drawn animation process is "flipping" and "rolling" your drawings to check the flow of the action.

It is often difficult to precisely simulate the traditional methods with digital programs such as TVPaint.  You are more or less simply "scrubbing" back and forth along the Timeline to view your drawings in rapid succession . It's not exactly the same as working with paper, but it can get close.  Read further to see how you can refine this process.

In TVPaint you can use your pen stylus (or mouse) to scrub along the drawings on the Timeline.  That's the most basic way of doing it.  Many times that is what I do .  It's simple and direct.

➔ You'll notice in the TVPaint lingo used in the User Manual and tutorials a drawing or image is often referred to as an Instance on the Timeline.  So , Next Instance or Previous Instance is the same thing as Next Drawing and Previous Drawing.

SEE: "What Is An Instance?"  in the TVPaint User Manual: "An instance is simply an image in an animation layer, an image whose duration can be adjusted on the Timeline."   Another way of saying it is that an Instance is the first occurrence of a drawing, which may be exposed for any number of  frames needed.  Most animation drawings are exposed "On 2s" (two frames each) or  "On 1s" (one frame each), but you can expose drawings (instances) for more frames if the character needs to pause or hold for timing purposes.

But what if you want to designate certain drawings as Breakdown drawings between the Keys and you want to be able to only flip between the Keys and Breakdowns , skipping over the remaining frames where the inbetween drawings will be inserted ?    There's an even more sophisticated way to handle this in TVPaint and it is called the FLIPS panel.    You can do a lot of customization on setting up your FLIPS panel (and you should look at the User Manual and watch the video tutorial about Flips) but I'm going to show you a simple way to approach it that works for me and you might find it works for you , too.

My approach is to mark my KEY drawings in RED , my BREAKDOWN drawings in BLUE, and the INBETWEEN drawings are unmarked.  So from a glance at the Timeline I can see where my KEYS, BREAKDOWNS , and INBETWEENS are.  (a possible option is to mark the Inbetweens with Light Green.  I occasionally have done that , but usually it works for me to only mark the Keys and Breakdowns. )

My FLIPS shortcuts in TVPaint are set up like this: 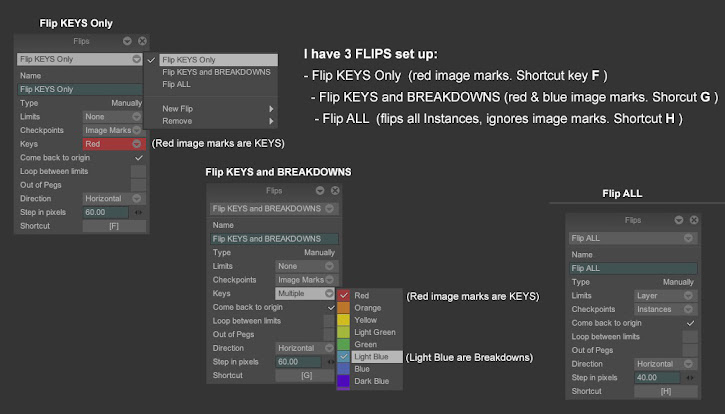 I have 3 FLIP settings:

By pressing the F key and moving my stylus over the surface of my tablet I can flip between the KEYS  only.  (skipping over the frames with Breakdowns and Inbetweens)

By pressing the H key I can flip between ALL the drawings -  Keys, B'downs, and Inbs.

NOTE: It does not have to be those three keys:  F ,  G,  H  ,  those are just the ones that I prefer.  You can set up the Flips shortcuts to any of the keys you prefer.

There are other adjustments you can make to fine-tune the Flips function in TVPaint , but that's the basic set up that works for me.   As I look back over what I wrote above , it reads more complicated than it is . Once you have it set up , it's easy.

Also, having the Flips options set up like this does not disable the basic functions of using the RIGHT and LEFT arrow keys (with or without the CMD or CTRL modifier) or simply scrubbing across the Timeline with the stylus .  It's possible to switch back and forth between the different methods rather effortlessly once you have your keyboard shortcuts set up and memorized and you can more or less hit those shortcut keys automatically , without having to think much about it (this comes through repetition)

If you don't want to use the Flips shortcuts and only need to flip from Key to Key , you can adopt a simpler system of Bookmarking each Key and setting shortcuts for Next Bookmark and Previous Bookmark to flip between them.  See TVPaint User Manual section on Bookmarks.  The default shortcuts are Ctrl Shift Right for Next Bookmark and Ctrl Shift Left for Previous Bookmark, but you can assign those to other keys if you prefer. 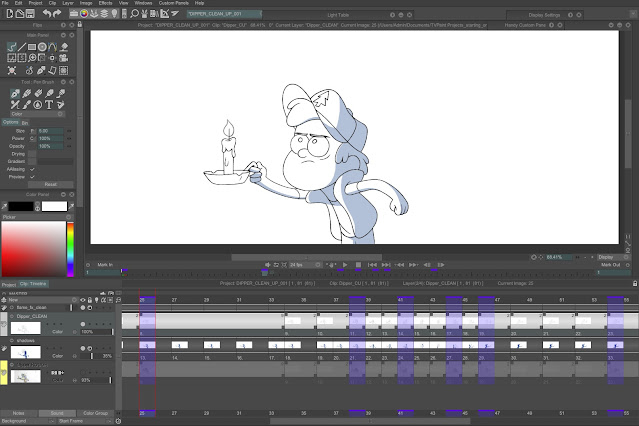 (each of the drawings marked with a blue Bookmark is a Key pose.)

This is all based on the classical system of designating animation drawings as KEYS (EXTREMES), BREAKDOWNS , or INBETWEENS.

(I realize some animators , Richard Williams for one well-known, vocal example, prefer to make a distinction between "KEYS" and "EXTREMES" ,  and I understand the logic of his argument about it , but I've found that in practice many very fine animators tend to use those two terms synonymously , so I'm ok using the terms KEY (aka Extreme), BREAKDOWN , and INBETWEEN .  Also, both TVPaint and Toonboom Harmony use the term KEY , so it seems convenient to retain the same terminology for this demonstration.  Something else that influenced me is that master animator Eric Goldberg uses the terms KEYS , BREAKDOWNS, and INBETWEENS in his book "Character Animation Crash Course" , so following Eric's lead, I'm ok with using that terminology.  If anyone feels it is important to make a distinction between a KEY and an EXTREME , I get it ,  I'm with you ,  I understand the logic of what Richard Williams was getting at , but I'm not going to cut it that fine for the purposes of this demonstration.)

Well, this blog has certainly been dormant for a while. (since 2015!) I really should start posting again. There are certainly MANY more examples of animated productions (large and small) made with TVPaint that I could post , but haven't gotten around to it (yet). For the latest, check in on the TVPaint User's Community in the Made with TVPaint forum , also TVPaint's Instagram and TVPaint's Facebook Page.

I thought I'd get back into posting here by mentioning a nifty new keyboard shortcut in TVPaint 11.5 :  'Close/Restore All Drawers'.  I have mine set to "J" because it was an unassigned key. You can assign the shortcut to whatever key you prefer .)

NOTE: If you want to hide the Timeline only but leave the Drawers open , the keyboard shortcut is 0 (zero) .

https://youtu.be/Ahd8LNNbjRQ
Posted by David at 7:49 AM No comments: 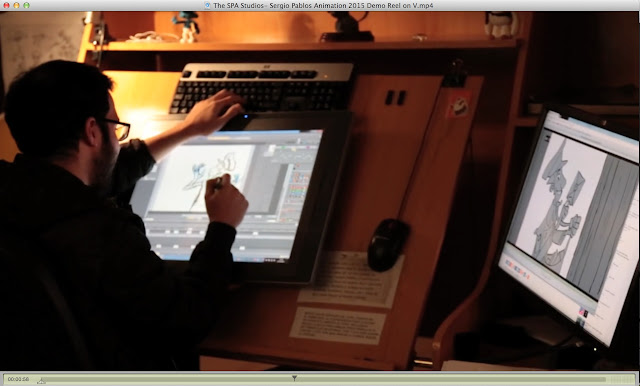 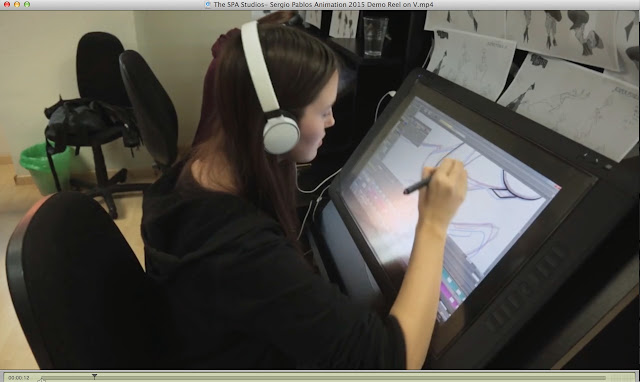 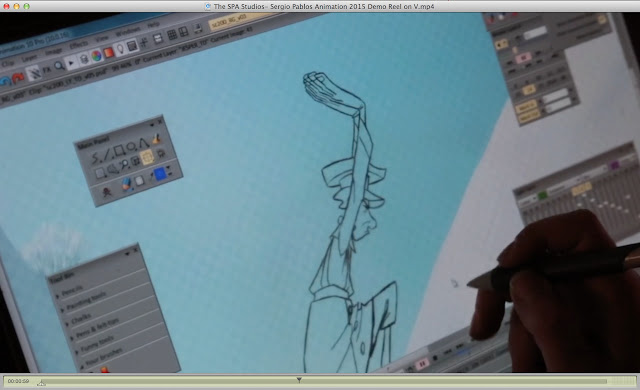 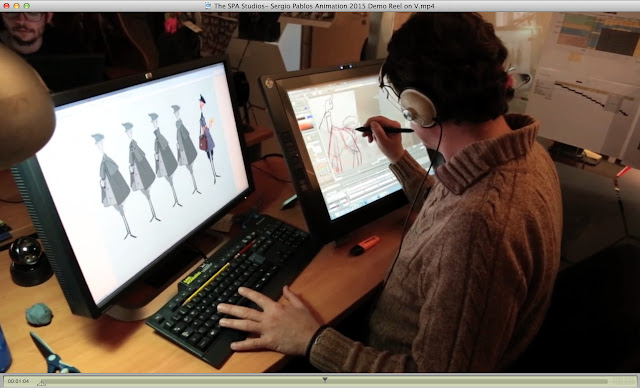 Klaus Rough Animation Reel from Jorge A. Capote on Vimeo.

UPDATE , Feb. 28, 2021: definitely check out Aaron Blaise's YouTube Channel for the many additional animation tutorials he has posted in the past six years since I first made this post. You can learn a lot about animating and using the TVPaint interface just from watching his Livestreams of him animating scenes using TVPaint.
-------
Check out master animator Aaron Blaise's new set of Video Tutorials on the 12 Principles of Animation , using TVPaint.   (this is really good stuff , whether you're using TVPaint or not  ... it's not software specific , it's all about basic principles .  Highly recommended) .

Here's a free sample of one of Aaron's animation tutorials using TVPaint:


Also, be sure to subscribe to Aaron's YouTube Channel .  He has other free animation tutorials posted there:

Including this great overview of the basic functions for animating in TVPaint:

Pablo Navarro animation for "The Legend of Smurfy Hollow" , animated in TVPaint

"Rough Tie Down Animation for the direct to video Feature film 'The Legend of Smurfy Hollow', done for Sony Pictures Animation and The Spa Studios.
All work has been done by Pablo Navarro except by the layout clips. Enjoy!"

Another piece animated by Paul Schwarz -

Aaron Blaise is a former Disney animator (and fantastic all-around artist) who is using TVPaint Animation .   Check out Aaron's art tutorials on his YouTube Channel :

There are many more animation and painting tutorials on Aaron's YouTube Channel:

Aaron also has a fantastic series of videos on how to animate Quadruped movement .  It's currently on sale for $40  for 3 tutorials.  Highly recommended.